As a female customer enters an unmanned Watson convenient store, an AI system quickly recognizes her and recommends her favorite snacks and lipsticks, which she can pay for with her smartphone.

At a local steel production line, flames of more than 1,000 degrees Celsius roar from a furnace, while an engineer is closely watching and controlling the manufacturing process via a digital twin plant from his air-conditioned office.

A cargo ship loading 80,000 tons of sugar sails off from Brazil to China and a system based on “cloud native” technology immediately predicts the weather during the voyage, the traces of other passing ships and how the shipment of products would impact the global economy.

These are several of the many examples displayed at the World Artificial Intelligence Conference (WAIC) 2022 in Shanghai about how the metaverse will reshape people’s lives, as well as urban operations and various industries.

The metaverse is a network of 3D virtual worlds focused on social connection. The term originated from Neal Stephenson’s 1992 science fiction novel “Snow Crash,” where humans interact with each other in a 3D virtual space.

Based on the concept, a metacity will become an updated version of the “digital city” and an inevitable tendency of the future urban development, according to the 2022 International AI City Forum on the sideline of the WAIC.

“Metacity is the core of the metaverse, where we can use imagination to drive the creativity of the real city, while the construction in the real city can also bring more opportunities to the metacity,” explained Wu Zhiqiang, a member of the Chinese Academy of Engineering.

Scientists and officials from Finland, Germany, the United Kingdom and the United States shared their latest visions on the metacity, with domestic officials and experts at the forum. 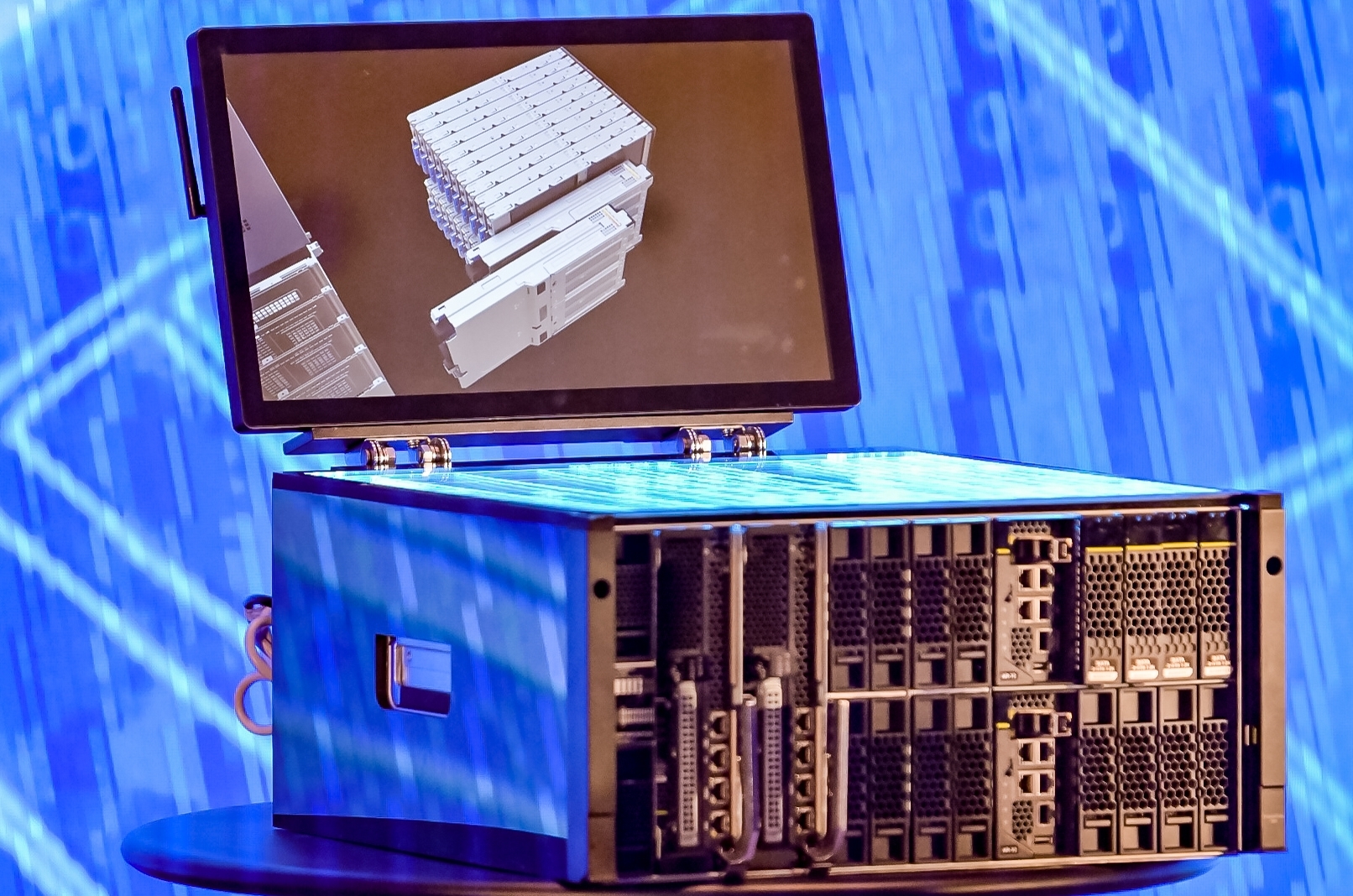 The center, based on cooperation between Yangpu and local universities such as Tongji, Fudan and Shanghai Jiao Tong as well as the tech giant Alibaba, aims to use the AI technology to support the city’s digital transformation and development of the global scientific innovation center.

According to the blueprint, the center will develop and widely apply AI applications in local communities and districts till 2026 as the first phase of its development.

In the second phase between 2027 and 2035, the center will make major breakthroughs in AI applications and create an intelligent social governance demonstration for other Chinese cities.

One of its focuses is the cloud-native, which aims to promote open-source and sharing technology among domestic tech enterprises.

Yangpu has initiated a joint development plan with partners from Yangtze River Delta cities on the Digital Native Evolution sub-forum during the WAIC.

It will be used in future unmanned chain stores of Watson to record and analyze the consumption habits of each customer, said Chen Qiyan, founder of DaoCloud.

“Based on the cloud-native technology, the data collected by each chain store will be integrated in real time, with no need to send the information to the headquarters of Watson,” Chen explained. 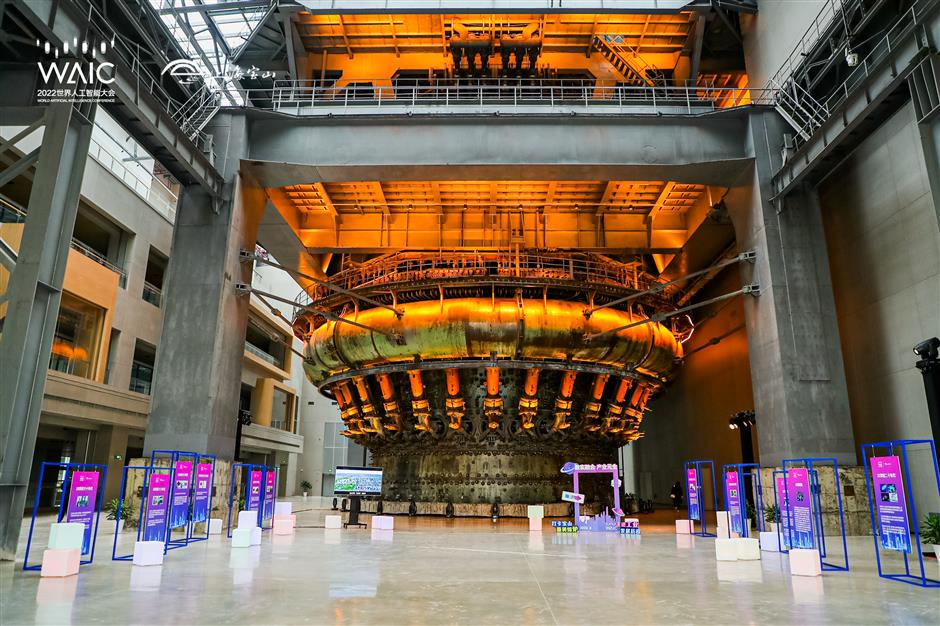 A former furnace of Baoteel has been converted into an exhibition center which hosted a sub-forum of WAIC.

Metaverse is also reshaping the industrial transformation of Shanghai’s former iron-steel production center in northern Baoshan District, one of the key development strategies of the city.

Ten promising industrial metaverse applications were unveiled at the ninth China Industrial Internet Summit over the weekend among the high-tech parks, intelligent manufacturing factories and biomedicine companies in Baoshan.

They include automated quality inspection and malfunction diagnoses, unmanned logistics in industrial parks as well as patrolling robots alongside production lines.

“These applications reveal the industrial Internet has upgraded to be the ‘meta-industry’,” said Zheng Yang, deputy director of the economic commission of Baoshan.

“We aim to use metaverse technologies to increase output, while reducing the cost for many manufacturing companies who have to handle complicated production processes.”

A group of meta-industry incubation parks and industrial bases will rise from the Nanda Digital City and Wusong Smart City, two new subcenters based on the former chemical and iron-steel factory clusters in the city’s north.

The first batch of meta-industry pilot factories will also be unveiled at leading companies such as steel producer Baowu, pharmaceutical firm CanSino and Fanuc Robot. 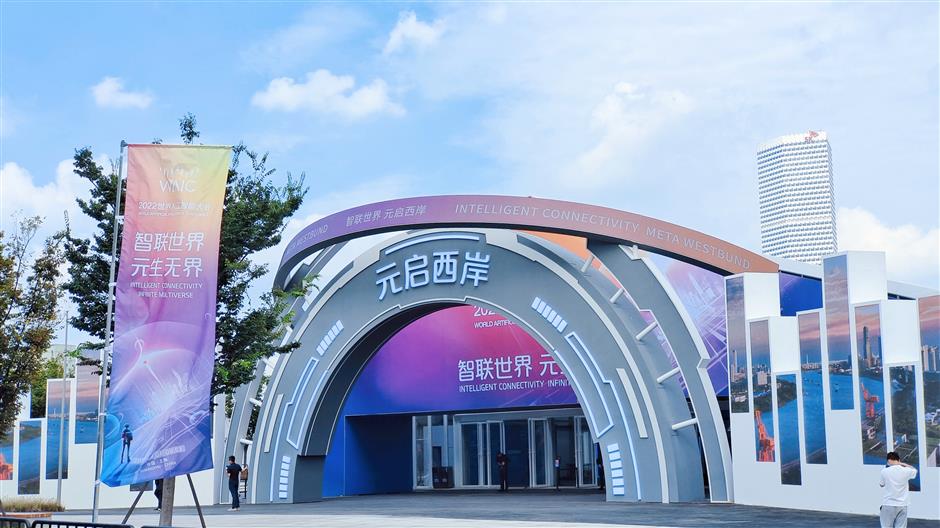 The West Bund of Xuhui along Huangpu River has become a gathering place for AI enterprises both from home and abroad.

The industrial scale of metaverse-related sectors will reach 350 billion yuan by 2025 with a batch of supportive measures from the city and district governments, according to the city government.

Xuhui District has unveiled the city’s first batch of district-level supportive policies for the metaverse industries. The district government pledged to support metaverse content designing, scenario creation as well as research and development of wearable devices.

“Xuhui will offer equal support to the metaverse sectors as to the AI industry when it emerged several years ago.”

A high-tech innovation carnival was launched in the Caohejing Industrial Park during the WAIC, inviting global professionals to a metaverse scenario designing competition.

Meanwhile, elite overseas Chinese returnees on Saturday established an AI association on the West Bund, one of the host sites of the WAIC 2022.

The AI branch of the Western Returned Scholars Association is expected to attract more professionals to meet Shanghai’s ambition to become a highland of the AI technologies, said Zhang Yi, an official with the Shanghai Commission of Economy and Informatization. 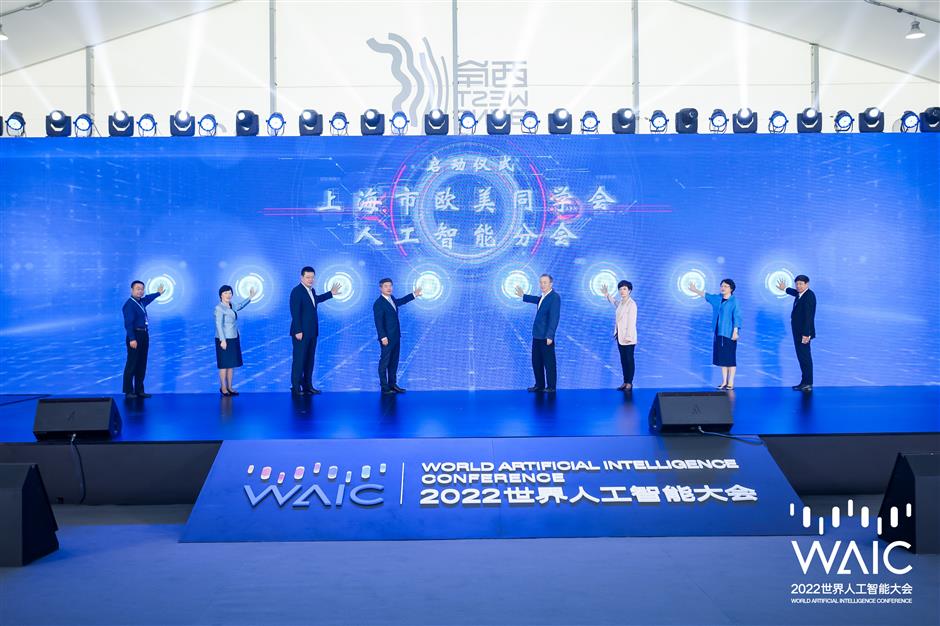 Officials unveil the AI branch of the Western Returned Scholars Association on the West Bund on Saturday.

Maxis has stepped into the metaverse with its Maxis Centre Decentraland. While still in its preliminary stages, Maxis in metaverse aims to provide a unique destination for an immersive experience with highly engaging, relevant and rewarding interactions. As part of this exploratory phase, the telco has unveiled a virtual telco store...

Joining The Sandbox Metaverse: All The Cool Cats Are Doing It – Forkast News

Argos Begins Advertising On Billboards In The Metaverse – NFTevening.com

sponsored Solidus Ai Tech has recently announced a new strategical partnership with Galaxy Arena, currently the only VR Earn game aggregator metaverse hub. Galaxy Arena are really making some noise in the Play2Earn and Meta space by bridging the gap between virtual and reality by ‘bringing events, attractions and businesses...