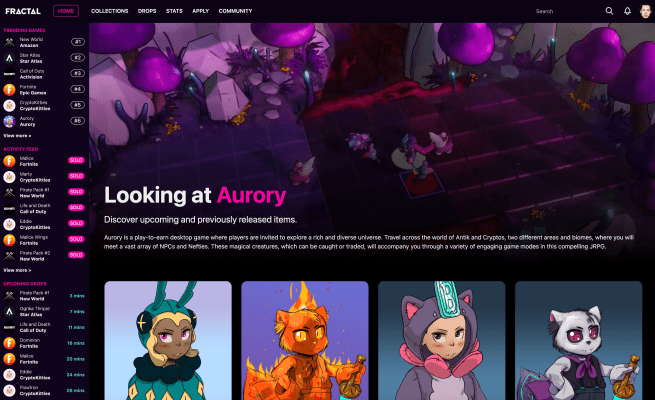 While OpenSea has already seemed to win the lion’s share of NFT marketplace traffic, competing storefronts are still striving to find their niche and prepare for a future where NFTs mean more than tradable JPGs.

Fractal, a new NFT marketplace co-founded by serial entrepreneur Justin Kan, is looking to capture that opportunity on a rising network, the Solana blockchain.

The platform is being built around opportunities in gaming and so-called play-to-earn titles, allowing users to shop for avatars and digital goods. The platform has been focusing on bulking up support for existing crypto games ahead of launch, but Kan and the Fractal team are hoping to turn the platform into a sort of Kickstarter for blockchain games, allowing users to buy exclusive NFTs in pre-sales that help fund the creation of the games themselves.

Kan and the rest of the team hope to launch the Fractal platform publicly in the coming weeks.

Like many other networks in the crypto space, it’s been a good year for Solana, though the blockchain’s backers have had a better year than most as they’ve watched the value of the currency tied to the network balloon from under $2 to over $250 this year (though the currency has seen a substantial correction in recent months). The network is a bet on a future where the Ethereum network’s modularity and slow-moving central foundation fail to keep up with the needs of the Web3 user base. Proponents see the low-fee high-bandwidth structure as an ideal place to build NFT projects.

“I believe that Solana is the future of gaming,” Kan tells TechCrunch.

Kan previously co-founded Twitch which famously exited to Amazon. Since shuttering his last startup Atrium, Kan has been focusing on his entrepreneurship-focused YouTube channel and podcast as well as the incubator/investment fund Goat Capital, which he’s been building with partner Robin Chan. Fractal is a product of this incubator and an effort Kan is hoping to put some his founder star power behind by joining as co-founder and president of the effort. Chan will also be taking the role of Head of Business Development alongside Fractal’s other co-founders CTO Mike Angell and CPO David Wurtz.

Fractal is, in part, a bet of the importance curation will play in a blockchain future where fees and listing friction are eliminated by more consumer friendly blockchains and scaling solutions. To date, Ethereum’s expensive listing costs have been one of the few things stopping spammers from flooding existing marketplaces with thousands of low-effort NFTs.